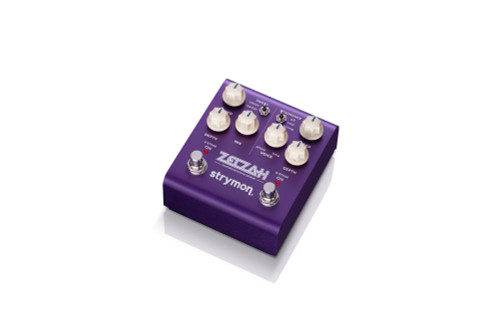 Step on Zelzah, play one chord, and you’re instantly taken back to a world of classic phaser tones as they were always meant to sound, perfectly voiced, with tons of vibe. Vintage 4-stage and 6-stage phasing with controls that allow seamless transitions to vibrato, gorgeous flanging and chorus, and new sounds never heard before—all instantly musical with great tone all the way across every dial.

Two Effects At Once.

Zelzah is actually two different phasers, side by side in one pedal. Zelzah’s 4-stage side gives you a wide array of classic tones ranging from phasing to vibrato and more, while the 6-stage side provides phasing, flanging, chorus, and all points in between.

Dial in a chorus on one side and barber pole phaser on other, or a phaser on one side and tremolo on the other. Use the two sides independently or together in a variety of configurations. Zelzah may become the only modulation pedal you keep on your board.

The first Sweep mode is labeled “Classic” because this is the classic four stage phaser sweep we all know. In this Sweep mode, a single LFO with a warped triangle shape creates that familiar vintage sound.

Similar to the visual effect of a barber pole, the Barber sweep is a continuously rising or falling effect that is traditionally done with frequency shifters. In Zelzah we have used an arrangement of synchronized four stage phasers to produce the effect while maintaining the four stage sound.

Set the Sweep switch to Env and you’ve got a whole new pedal under your feet. Now the phaser responds to your picking like an envelope filter/auto-wah would, with the phaser sweep being dynamically controlled by your input signal, creating harmonically complex and very funky sounds.

The Voice knob on the six stage side simultaneously controls over 30 different parameters, all working in harmony for an inspiring musical experience.

Not only do you get thick, juicy, phasing with pure vintage vibe, but as you turn the Voice knob clockwise, our groundbreaking new modified all-pass structure expands the time response of the cascading all-pass filters seamlessly and continuously, adding spaciousness and airiness to the sound.

Explore a range of fresh musical tones that are not a mix of phasing and flanging, but actually something entirely new. Turn the Voice knob to the right for luxurious true flanger effects, and continue to the far end of the range for lush vintage chorus sounds.

There are inspiring musical sounds at every point along the dial, and so many ways to make a sound that is truly yours.

Vintage Phasing, Even Better Than You Remember.

Our goal was to capture the rich phasing sounds that were introduced in the 1970s that work so beautifully with electric guitar and electric piano.

In addition to providing the best possible version of the vintage phaser sounds we grew up with, we also wanted to expand the sonic possibilities in a way that was unique and unexpected for a phaser.

To do that, we developed an architecture that contains a modified all-pass filter as the basis for the 6-stage phaser.

A phaser is a filtering effect made up of cascading all-pass filters. There are no delay lines. But with our modified all-pass structure, we are able to expand the time response of the all-pass seamlessly and continuously.

The four stage Mix control can be used to dial in a surprisingly wide variety of sounds. With Sweep set to Classic, the Mix control gives you a range from subtle phasing to full-on classic phasing sounds, and then onward to some quite pleasing phase vibrato effects.

With Sweep set to Barber, higher Mix settings with lower Depth settings can get into harmonic tremolo territory.

On the four stage side, we wanted to provide the classic sounds you expect from a premium four stage phaser, while adding barber sweep and envelope controlled sweep, and a Depth control that is tuned to deliver great phasing sounds even at very shallow settings.

The 4-Stage Depth control is designed to respond musically and intuitively across its full range, and varies in its effect depending on which Sweep mode is selected.

In both Classic and Barber modes, behind the scenes as you turn the Depth knob, the center frequency of the Sweep is internally adjusted to keep the frequency range in the sweet spot, producing a wide palette of beautifully voiced sounds across the entire range of the control. Additionally in Barber mode, feedback is added for increased intensity as the Depth is turned up.

With Sweep set to Envelope, the Depth knob sets input sensitivity, while the Speed knob sets the sweep range. Experiment with those two controls for a wide variety of envelope phaser tones including some very vocal-sounding timbres.

The 6-stage sweep is carefully tuned, and behaves differently as you change Voice, Depth, and Speed settings.

Just one example of this: Toward the end of the Voice range (in vintage chorus territory), the LFO morphs from a smooth triangle to a warped shape that introduces a classic warble to the deepest chorus tones.

The behind the scenes interplay between Zelzah’s parameters means that you can experiment and be assured of musically useful results at every turn.

The Resonance circuit adds feedback from the output back to the input of the six stage phaser to intensify the frequency notches and peaks.

Choose no resonance (off) or use the carefully tuned Mild or Strong settings.

Resonance not only contributes to dramatic phasing effects, but at higher Voice settings can yield some of the most sought after classic flanger sounds.

The rich vintage chorus effects available at the highest Voice settings can be uniquely enhanced by the Resonance switch, an option not commonly available on chorus pedals.

Zelzah features full stereo in and out capabilities.

It can also receive mono input and still give you stereo output if you’d like to use it as the stereo origin point of your signal path.

When using stereo outs, use the Stereo Spread live edit function to increase the stereo spread between your outputs to create a dimensional stereo image with life and movement.

Being true stereo, Zelzah processes incoming stereo signals independently, with the left input being treated to its own 4-Stage and 6-Stage phasers, and the right input also having its own respective phasers.

Pair that with the ability to also process incoming stereo signals in Split mode, where the 4-Stage phaser processes the left input only and the right input is processed by the 6-Stage phaser, and Zelzah just may be the most flexible modulation pedal on your board.

Any Way You Want It.

Zelzah gives you the freedom to route its two sides in a variety of creative ways.

Choose Series and the six stage phaser runs into the four stage, just like two pedals side by side on a pedalboard.

Choose Parallel and your dry signal will be processed by each phaser independently and mixed at the output.

What’s Better Than One Phaser? Two.

Zelzah gives you two fully independent, versatile phasers at the touch of a button.

Use one at a time, or use both in one of several possible routing configurations.

With each phaser having a wide range of control over its tonal characteristics, the possibilities are near infinite with Zelzah.

Musical Sounds At Any Settings.

Our team spent months working to perfect each aspect of Zelzah’s sound design, making it so that any combination of settings would yield musically useful tones.

Experiment to your heart’s content knowing that organic, lush modulation awaits at every setting.

Our groundbreaking 6-Stage phaser algorithm can take you from vibey vintage phasing to full-on flanging with the turn of a knob. Go even further and achieve iconic chorus tones, all with just one pedal.

Zelzah’s 4-Stage side is just as versatile, with everything from classic phasing to warbly vibrato available, and even tones that border harmonic tremolo territory.

Zelzah features full stereo in and out capabilities.

It can also receive mono input and still give you stereo output if you’d like to use it as the stereo origin point of your signal path.

When using stereo outs, use the Stereo Spread live edit function to increase the stereo spread between your outputs to create a dimensional stereo image with life and movement.

Being true stereo, Zelzah processes incoming stereo signals independently, with the left input being treated to its own 4-Stage and 6-Stage phasers, and the right input also having its own respective phasers.

Pair that with the ability to also process incoming stereo signals in split mode, where the 4-Stage phaser processes the left input only and the right input is processed by the 6-Stage phaser, and Zelzah just may be the most flexible modulation pedal on your board.

Want even more control over Zelzah? Connect an expression pedal and enjoy a whole new level of instantaneous, continuous control. Set as many knobs as you like for the heel position and toe position of your expression pedal, and all settings will simultaneously morph throughout the full range of the expression pedal.

If you need more presets, connect a MultiSwitch Plus for three presets available at the press of a footswitch.

With full MIDI implementation, you can also control just about every switch, knob, and setting remotely with by sending MIDI commands from your controller or DAW via Zelzah’s EXP/MIDI jack or USB-C connection.